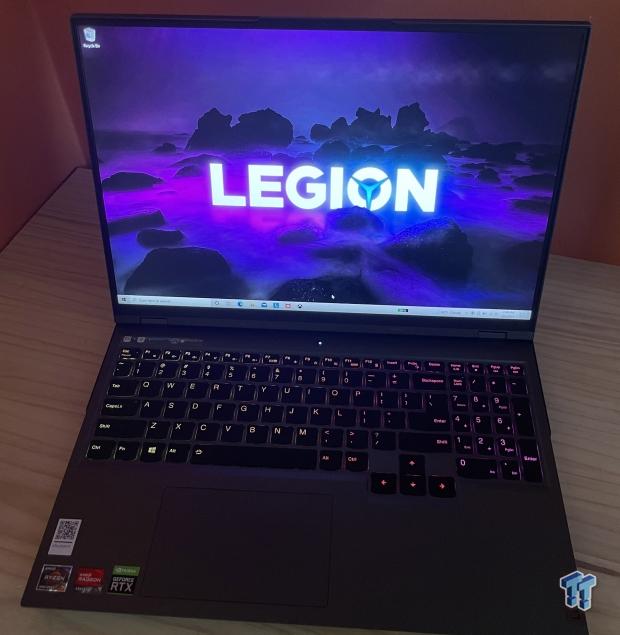 With the AMD Ryzen 6000 series mobile CPUs announced at CES, I was eagerly awaiting an opportunity to test and review a current-generation platform powered by the Ryzen 5000 series before they are gone. It just so happens we just got the Legion 5 Pro in from Lenovo, and after a half-day of setup and another few days of testing, we now have a good comparison for Team Red in our charts.

Like any gaming notebook, the Legion 5 Pro is offered in several SKUs customizable to your liking at the time of purchase. There are also base SKUs available at retailers like Best Buy, Amazon, etc. The model sent for review includes the AMD Ryzen 7 5800H, 16GB of DDR4 3200, and a 1TB SN730 NVMe from WD. It also includes the NVIDIA GeForce RTX 3070 Mobile and an impressive 16″ display that puts out 2560×1600 resolution at 165Hz, complete with Dolby Vision and NVIDIA G-Sync.

At the time of writing, pricing for the Legion 5 Pro Gen 6, configured with the components mentioned above, comes in at $1774.99. 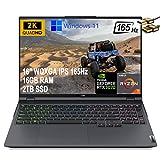 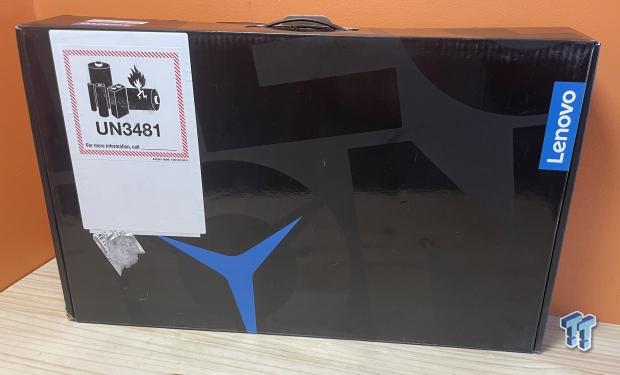 Packaging is dressed up with the Legion logo and black/blue colorway. 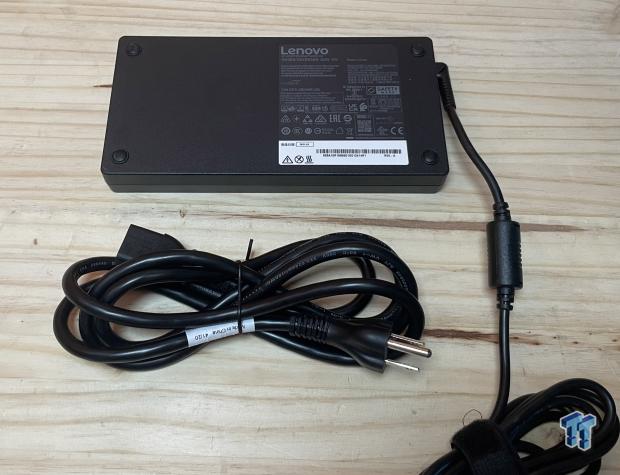 Included with the Legion is a power adapter. 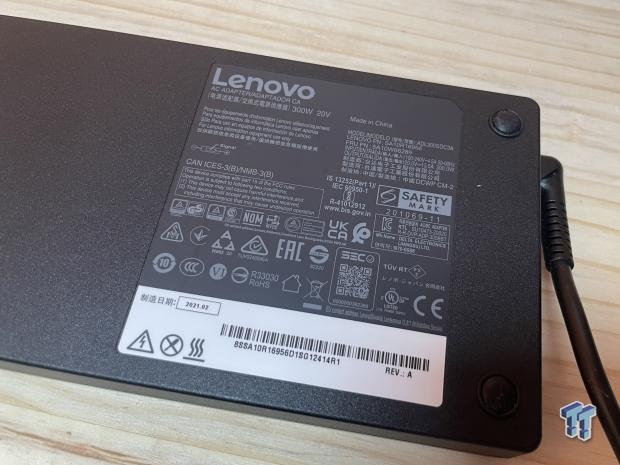 The power adapter is a Lenovo proprietary design type with a rating of 300W, 20V @ 15A. 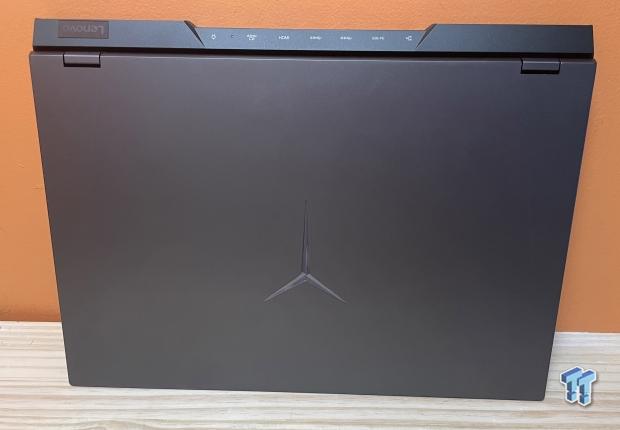 The Legion 5 Pro is offered in several colorways; the silver option in house offers Lenovo branding on the top edge and Legion gaming logo in the center of the display. The back edge of the Legion offers several options for connectivity labeled above.

These options include RJ45 for the Gigabit LAN and USB 3.2 with a USB-C input that supports power delivery. We then have three USB-A ports and HDMI and Lenovo proprietary power input.

The left side of the Legion offers a USB-C and 3.5mm port.

We have a single USB 3.2 port and shutter lock on the right. 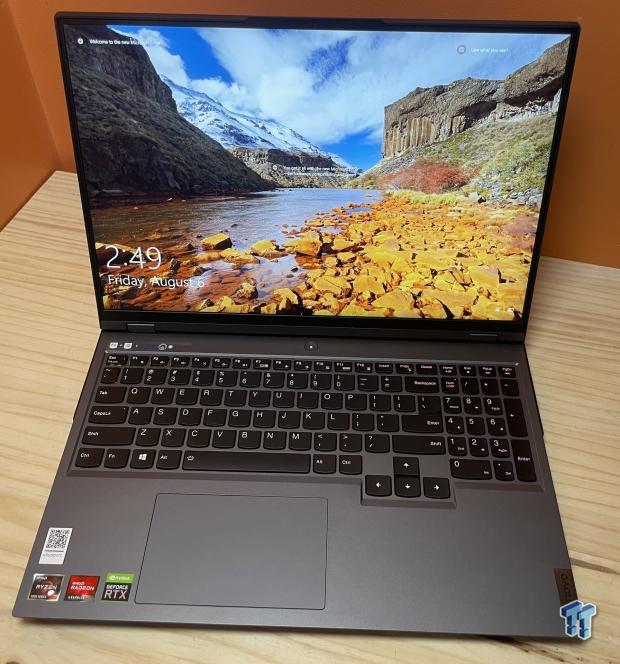 Opening up the system, we have a large 16″ display, with even bezels on top and bottom. A full keyboard and power button are centered, while the trackpad below is offset to the left. 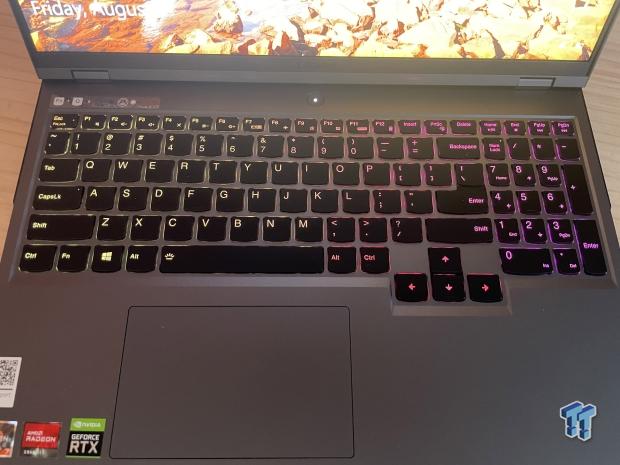 Here we can see the RGB backlighting on the keyboard. 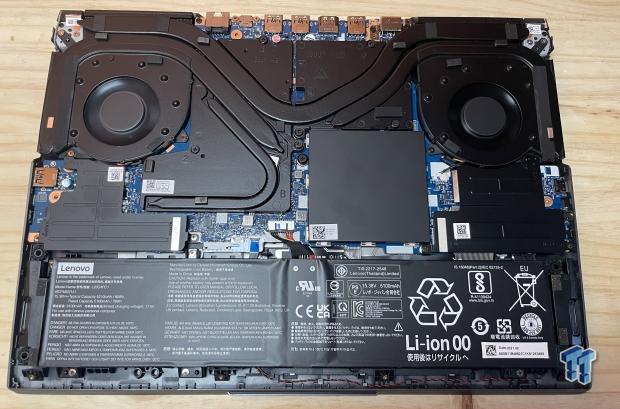 The wrist rest and trackpad area are where we find the battery. Above, we have NVMe on the right and left, both using PCIe Gen3. In the center, we have the memory slots, and up above that, the CPU and GPU with opposing heat sinks and cooling fans. 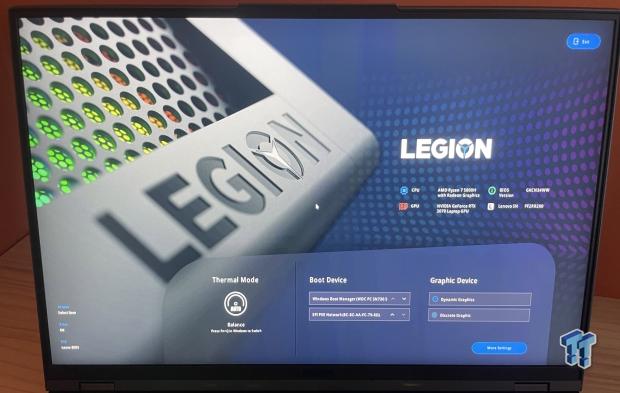 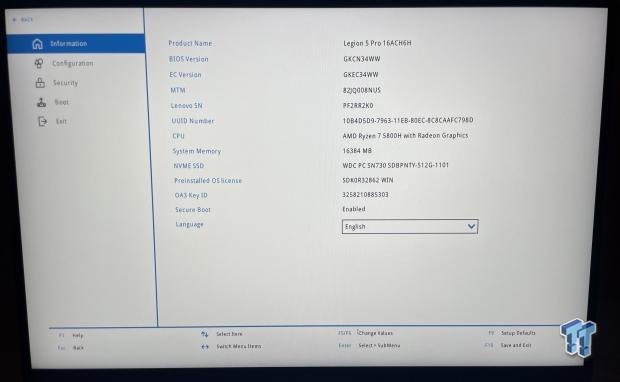 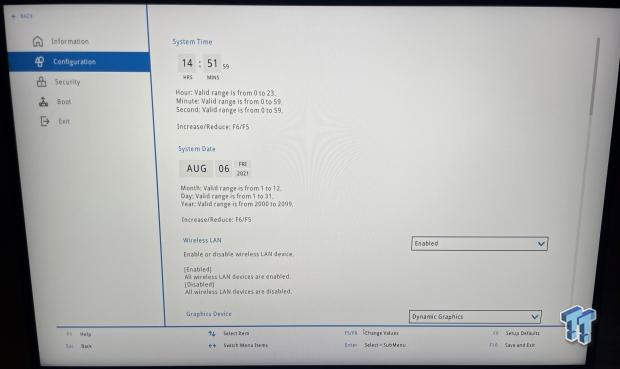 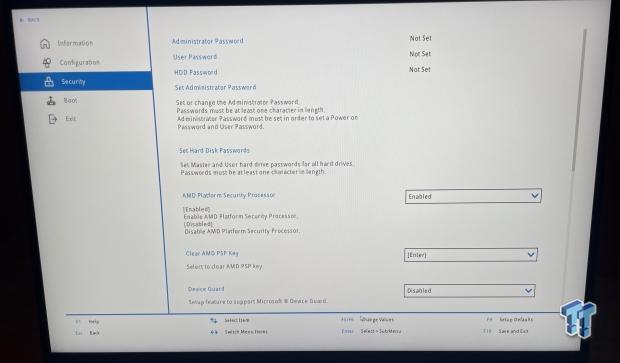 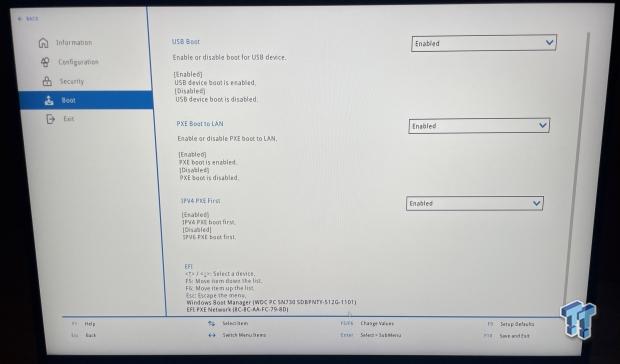 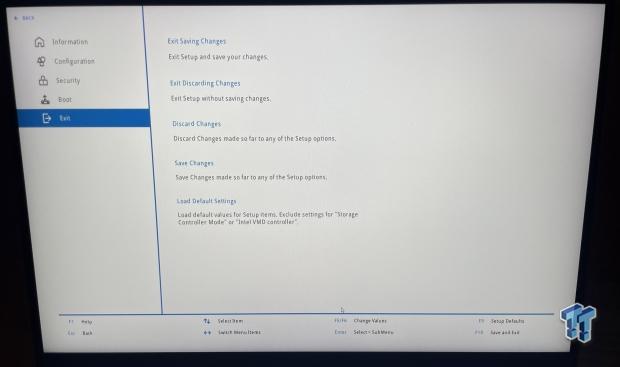 BIOS is a legacy setup from AMI. The main page offers hardware information, including processor, memory, and iGPU. The advanced menu system includes support for configuring CPU, power, and Thunderbolt ports in addition to NVMe storage. Chipset options allow for changing GPU mode between discrete and Optimus; you can also enable RST for NVMe storage in this menu.

We kick up our testing with a thermal image of the laptop while running testing. As you can see above, a good portion of the heat is centered above the keyboard. Peak readings at 33c.

Cinebench is a long-standing render benchmark that has been heavily relied upon by both Intel and AMD to showcase their newest platforms during unveils. The benchmark has two tests, a single-core workload that will utilize one thread or 1T. There is also a multi-threaded test that uses all threads or nT of a tested CPU 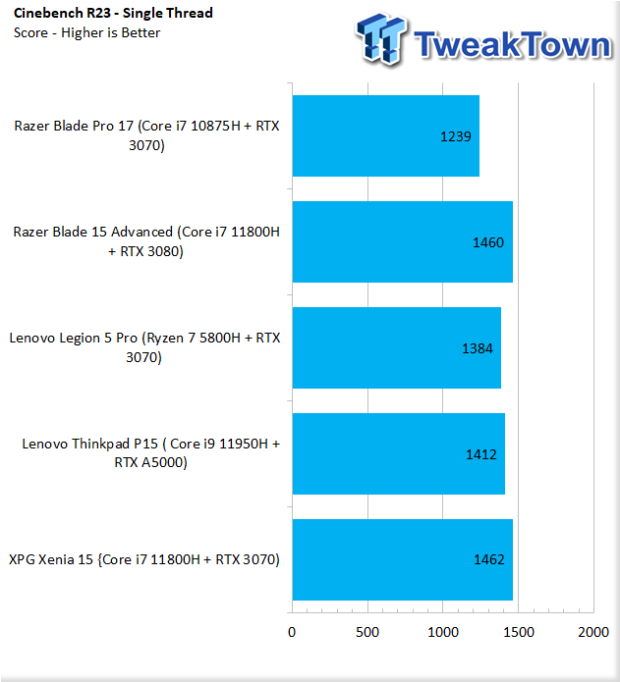 Single thread shows the 5800H offering a solid amount of performance over Intel 10th Gen but falls behind when put up against 11th Gen 11800H. 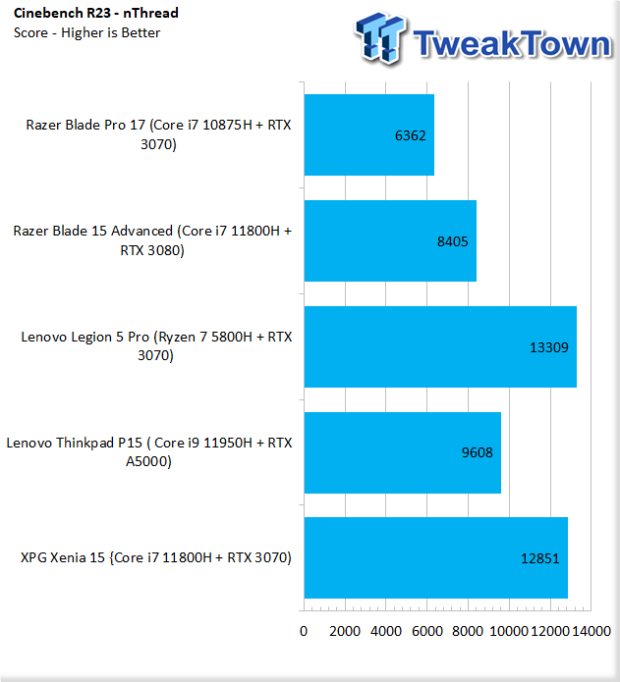 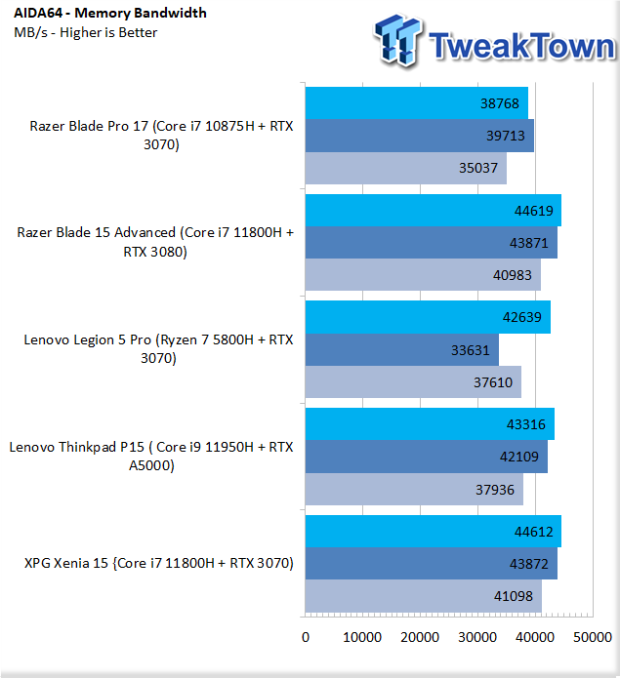 Memory bandwidth is on par with the Intel systems, 42K read 33k write and 37K copy.

PCMark is a benchmark from UL and tests various workload types to represent typical workloads for a PC. Everything from video conferencing, image import, and editing, along with 3D rendering, are tested. 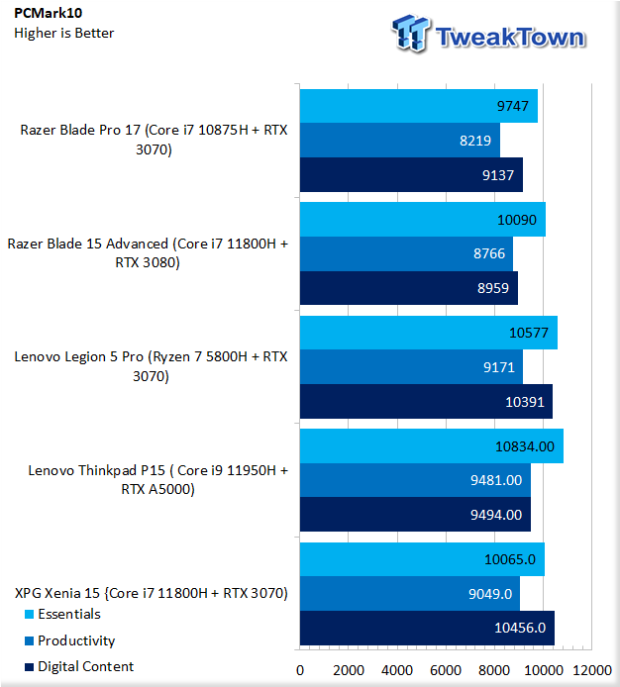 PCMark did show the Legion 5 Pro right with our comparable Intel platforms. A sizable boost in Digital content with a score of 10391. 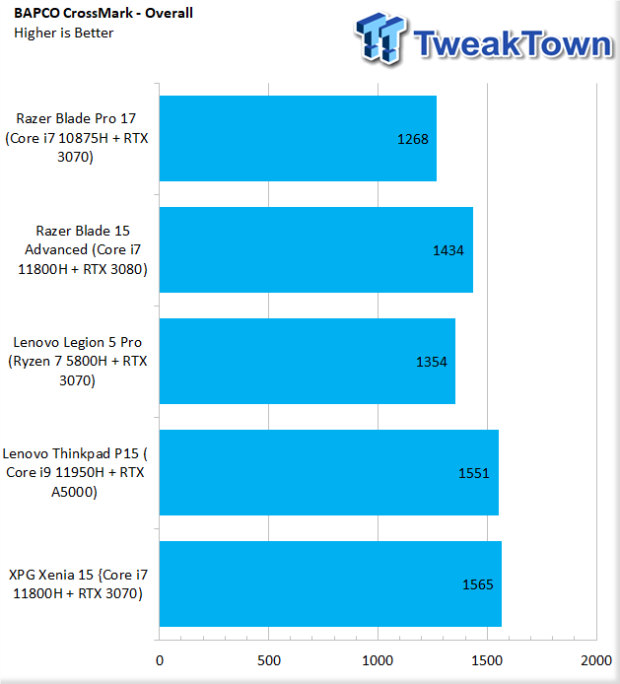 CrossMark showed the Legion at 1354, about 2000 points under comparable Intel platforms. 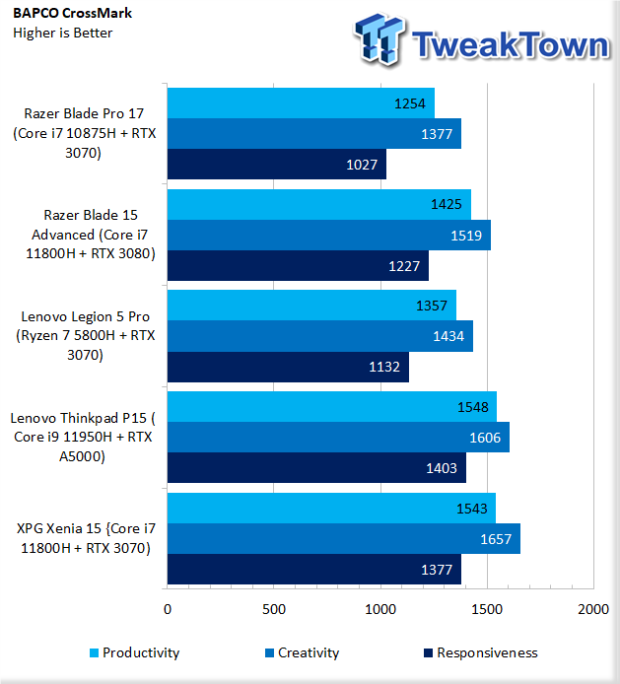 The breakdown includes a sizable gap in all scenarios, the 5800H lagging behind in Responsiveness by 300 points. 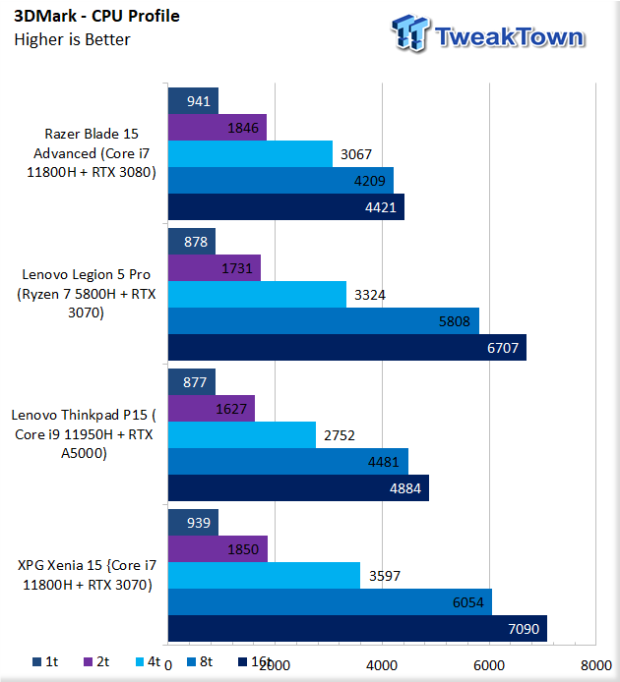 CPU Profile has the 5800H even with the 11800H throughout testing, the Xenia 15 being the best example of a proper Intel platform. 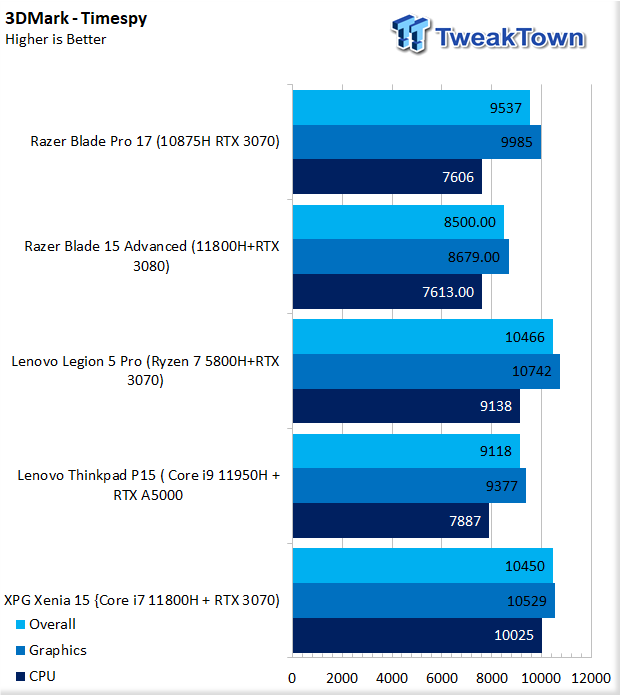 In Timespy, the Legion 5 Pro takes top marks. An overall score of 10466 with comparable Intel just behind at 10450. The breakdown shows a sizable GPU boost to the Legion, likely due to its better cooling system. 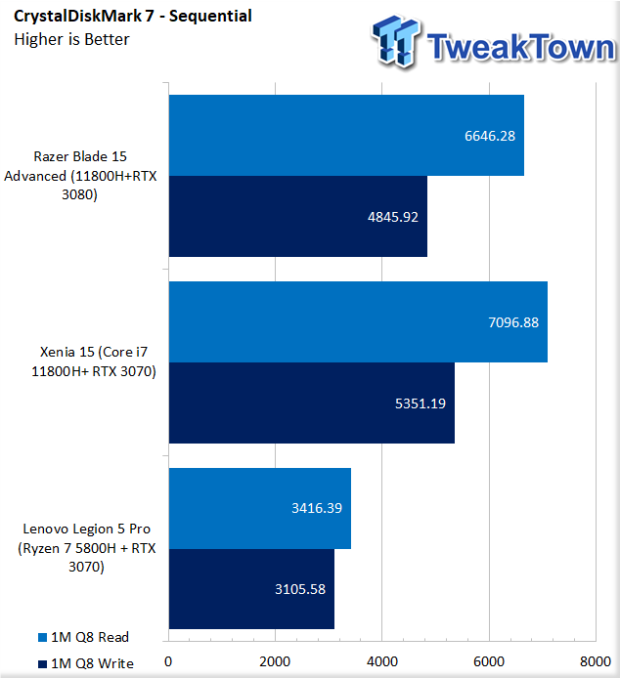 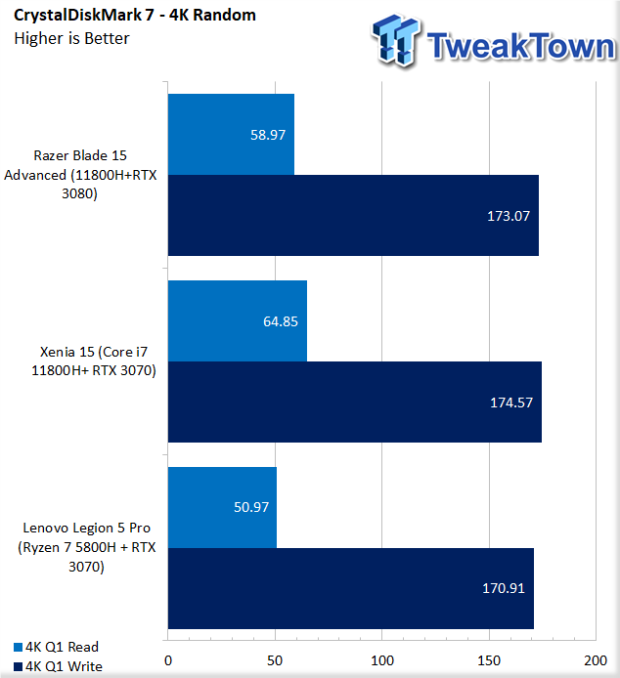 Going into this review, I was pretty excited to see what AMD had to offer with its mobile CPU lineup. We know on desktop platforms, the 5000 series had Intel on its heels until Alder Lake was released. That said, AMD has yet to offer a legit full-featured platform outside of its desktop, HEDT, and server lineups.

That story rings true once again with the 5800H, a solid CPU on its own with an 8C16T design and boost clocks reaching 4.4GHz. Add to this a legit cooling design from Lenovo that encourages the best performance possible. All of that high-end tech and AMD, for some reason, can’t implement PCIe Gen4 for NVMe or the RTX 3070.

Performance of the Legion 5 Pro rang right up with the best 11th Gen Intel platforms we have tested, including our favorite, the Xenia 15. In CPU-based scenarios, the multi-thread capabilities of the 5800H showed a considerable advantage over solutions like the Razer Blade 15 Adv and ThinkPad P15. Most notable was R23 nT alongside 3DMark with CPU Profile. Gaming did lean towards the Legion as well, Timespy showing a solid GPU advantage of the RTX 3070.

The connectivity of the Legion 5 Pro is ample, with plenty of USB 3.2 ports, both legacy Type-A and USB-C. Networking is solid with the AX200 chipset, but it would have been nice to see something better than gigabit for the wired port, given the platform.

Dimensionally, the Legion 5 Pro is a big notebook. Its weight, however, wasn’t too bad in day-to-day use. At 5.4lbs, it’s not so heavy you can’t backpack it to wherever you are going, though make sure to include the power adapter as battery life as a gaming laptop alone isn’t the best.