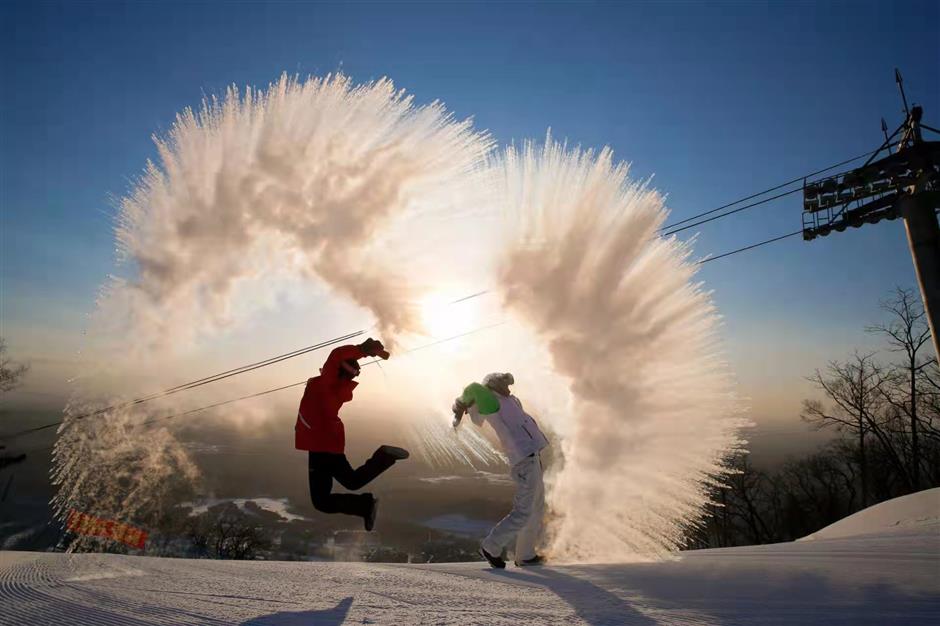 Fun in the snow at the Changbai Mountains.

The “staycation” travel trend will dominate the upcoming three-day New Year holiday with Chinese travelers responding to the government’s call to avoid unnecessary trips outside their hometowns to curb the spread of COVID-19, travel operators said.

Almost all hot spring hotels in Shanghai have no vacancies on New Year’s Eve and January 1, with only a few rooms left on January 2.

Shanghai resident Ma Ruiting was among those who are left making a booking too late.

“I decided not to travel to other cities during the holiday and checked local hotels almost three weeks ago,” Ma told Shanghai Daily.

“I love hot springs and used to visit cities in the Yangtze River Delta region during the holiday. However, when I started looking for an option in Shanghai, I surprisingly found there was no vacancy on New Year’s Eve, even if I have dropped the idea of a room with private hot spring.”

“Now, I am checking luxury hotels with a nice view of the Huangpu River as an alternative. All in all, a holiday needs a sense of ritual.”

Bookings made since December involving travel in the city or nearby provinces or municipalities for the upcoming New Year holiday have accounted for more than 50 percent of all orders, Shanghai-based online travel operator Trip.com revealed.

Among them, the bookings for hot spring attractions soared 40 percent from the same period last year, and hot spring trips have become the No. 1 vacation choice among “staycationers” based on booking data, according to the travel platform.

Skiing at the Changbai Mountains.

Meanwhile there has been a notable increase in the booking of amusement parks, hitting 94 percent compared with the same period last year since this month, among which 46 percent came from “staycationers,” Trip.com said.

The boom in amusement park trips has also boosted the business of nearby hotels, it said.

The number of hotel bookings within a 5-kilometer area near Universal Beijing Resort surged 160 percent since December.

Online travel operator Tuniu.com said about 49 percent of tour products booked for the holiday so far involved travel within or near people’s home cities.

Females are more passionate about taking a trip during the holiday than males, it said.

A total of 61 percent of bookings for the holiday were made by female travelers, among whom nearly 50 percent are aged between 26 and 35.

Sanya in Hainan Province as a popular beach resort has maintained its position as the favorite destination among Chinese travelers during the holiday. Ski trips in China’s northeast and hot spring hotels in East China are also gaining popularity with bookings climbing, according to Tuniu.com.

Hainan, Jiangsu, Shanghai, Beijing, Guangxi, Yunnan and Hubei are among the most popular destinations during the holiday, it said.

Micro walking tours, sports themes, double-decker sightseeing buses, industrial and ecological attractions and educational trips, all enrich the travel options and cater to the diverse demands of “staycationers,” she said.

Many local shutterbugs prefer to celebrate the New Year by capturing the sunrise on the Bund on January 1. Museum tours, double-decker sightseeing bus tours, and walking tours along the Suzhou Creek and Huangpu River will be held during the holiday.

As Shanghai’s interprovincial group tours have resumed, after the last medium-risk residential complex in the Pudong New Area downgraded as low risk this week, more than 1,200 travelers will celebrate the holiday in Changbai Mountains in the southeast of Jilin Province between December 30 and January 1, the travel agency said.