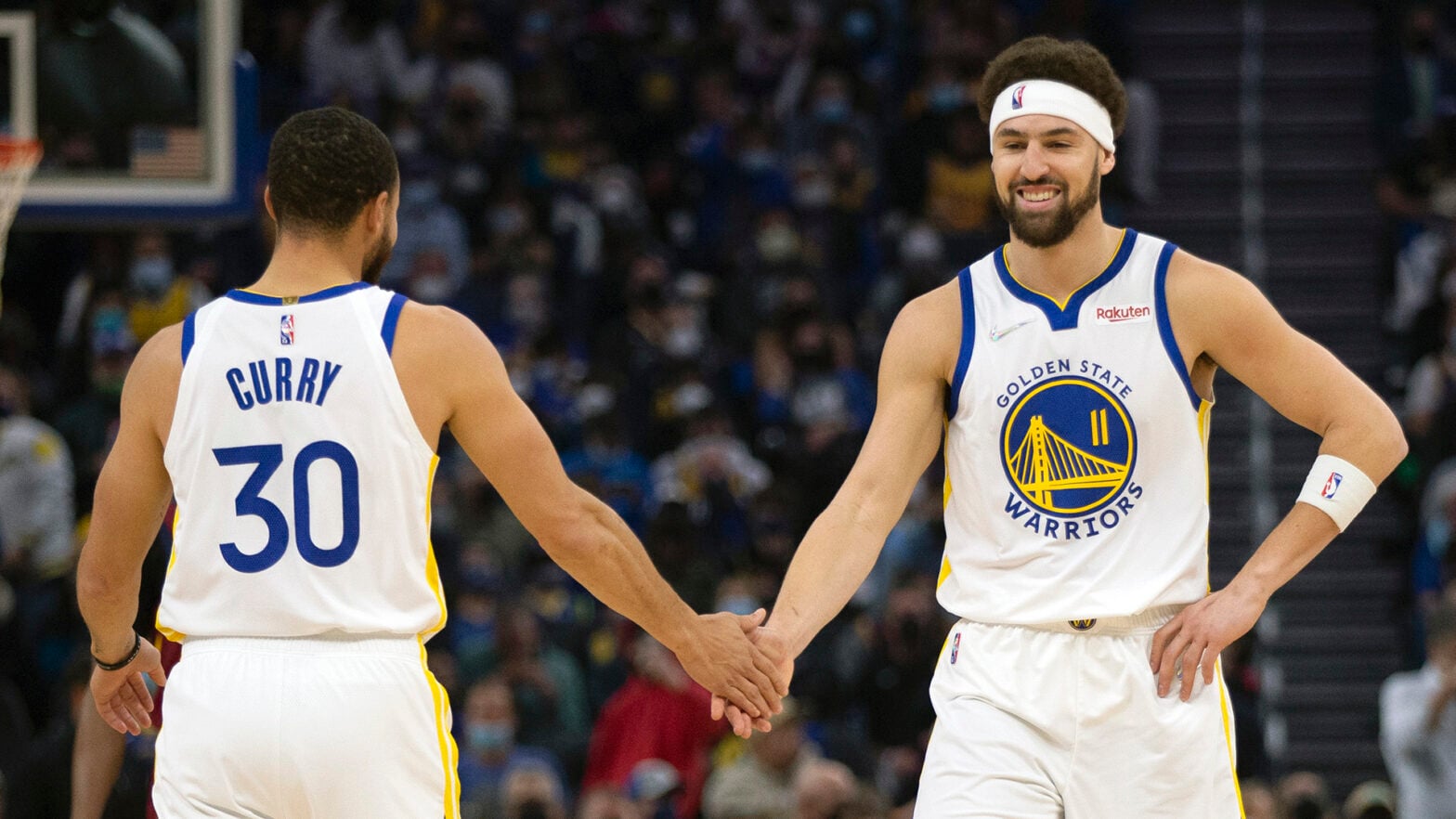 Stephen Curry and Klay Thompson were glad to reunite again on the court Sunday.

The moment could have prompted Stephen Curry to proclaim his greatness. Shortly after the Golden State Warriors’ star became the NBA’s career leader 3-pointers made, however, Curry deflected the attention away from himself and his strong marksmanship.

Once Curry arrived in the Warriors’ locker room after their win against the New York Knicks last month, he honored other elite shooters. Curry hung the jerseys of the players he eclipsed at No. 1 (Ray Allen) and No. 2 (Reggie Miller). Curry also hung the jersey of Warriors guard Klay Thompson after the two won three NBA championships together and became one of the best backcourts in NBA history.

“I’m not the shooter I am if I don’t get to see Klay every single day do what he does,” Curry said. “He keeps you sharp and understands to shoot the ball the way I want to, there is another guy that can do it, too.”

If only Thompson could witness the moment.

Thompson did not attend that game in New York when Curry eclipsed Allen’s 3-point record mark for a simple reason: he spent the last month practicing with the Warriors’ NBA G League team in Santa Cruz. That itinerary represented Thompson’s final rehab stages after staying sidelined the past 2 1/2 years because of season-ending injuries to his left knee (2019-20) and right Achilles tendon (2020-21).

“Steph knows how hard I work,” Thompson said. “When he was doing that, I was supporting him from Santa Cruz. I was competing against our G League team, and they were getting me ready. I was there in spirit. He knows that. He knows I had things to do. So although it was tough to watch, I knew I had to get right and get prepared to help this team win a chip.”

Finally, Thompson has helped the Warriors prepare for that moment. After staying sidelined for the past 941 days, Thompson returned for the Warriors’ win against the Cleveland Cavaliers on Sunday at Chase Center in a game that featured 17 points on 7-of-18 shooting, a one-handed dunk and some rust in just under 20 minutes.

Thompson hopes to make more progress when the Warriors (30-9) visit the Memphis Grizzlies (28-14) on Tuesday (8 ET, NBA TV). He’s looking to complement Curry against the Grizzlies’ talented young backcourt in Ja Morant and Desmond Bane. And of course, Thompson hopes to help the Warriors win an NBA title this season after spending the past two seasons in the Draft lottery (2019-20) and the Play-In Tournament (2020-21).

Curry and his teammates shared a laugh recently that Thompson did not directly experience the Warriors’ on-court hardships considering he spent most of that time in the trainer’s room. But during that lengthy ordeal, the Warriors and Thompson certainly missed each other. And now that Curry and Thompson have reunited, they sensed they can restore their winning partnership.

Take a look back at Klay Thompson’s triumphant return to the Warriors’ lineup.

“We have an amazingly talented group, and it’s very deep,” Curry said. “I don’t know what it’s going to look like. But I know we have the capability and opportunity to get there, and he’s a huge part of that obviously. It’s exciting it’s all coming together.”

It did not take long for Curry and Thompson to come together.

Shortly after the Warriors used their top picks to draft Curry  (No. 7 in 2009) and Thompson (No. 11 in 2011), Golden State dealt point guard Monta Ellis to Milwaukee for two reasons. The Warriors wanted to get bigger and did so by landing Andrew Bogut in the deal. They also wanted to empower Curry and Thompson with more opportunities to grow.

A year later, former Warriors coach Mark Jackson dubbed Curry and Thompson “the greatest shooting backcourt in the history of the game.” Jackson’s comments have since stood the test of time.

Curry and Thompson became known as the “Splash Brothers” for how they continuously soaked their opponents with elite outside shooting. Curry owns the NBA’s 3-point scoring record (3,016) in 13 NBA seasons and counting. Thompson cemented the NBA’s record for most 3-pointers made in a game (14), a record that Curry previously held. Curry (twice) and Thompson (one) have also won the NBA’s 3-point contest in various All-Star weekends.

In this interview from 2013, Klay Thompson and Stephen Curry talk about their then-burgeoning bond.

But when did Curry know he and Thompson would produce something special together?

“It was a gradual confidence,” Curry said. “We don’t really step on each other’s toes. We complement each other. But that takes a while to truly believe.”

Curry said that moment happened in 2014 when the Warriors challenged the LA Clippers to a seven-game first-round playoff series. Although former Clippers guard Chris Paul averaged 17.4 points and 9.0 assists per game on 42.3% shooting in that series, Curry became impressed with how Thompson challenged Paul defensively.

“That set the stage for what the next five-year run would look like,” Curry said. “He was a huge part of that.”

Curry and Thompson helped each other in various ways.

They worked as decoys for each other so at least one of them had an open look from deep. One of them filled it up from outside when the other could not. And when both could, defenses had a horrible decision to make with determining which player to prioritize.

“I couldn’t imagine playing with any other point guard because we got such a great chemistry,” Thompson said. “We know each other’s favorite spots and where we want the ball. I’m just thankful to share the backcourt with him because he’s such a selfless and amazing competitor and teammate.”

No wonder Curry honored Thompson after officially becoming the NBA’s top 3-point shooter of all time.

“Shooting the basketball is what we do,” Curry said. “The work we put in since he got here, the level of inspiration we both have for each other and the internal competition we had — all of that helped me get to that point throughout my career.”

Those fun times came to an abrupt halt when Thompson injured the ACL in his left knee against the Toronto Raptors in a decisive Game 6 loss of the 2019 NBA Finals. While Thompson stayed sidelined for the entire 2019-20 campaign, Curry played only five games after injuring his left hand only four games into the season. Then on the afternoon of the 2020 NBA Draft, Thompson ruptured his right Achilles tendon after taking a pull-up jumper in a pick-up game with other NBA players in L.A.

Though Curry finished among the league’s regular-season Kia MVP candidates, the Warriors could not make the playoffs without Thompson’s presence. While Thompson spent the past 13 months rehabbing that injury, Curry comforted him occasionally on the sideline while watching the games.

A still-rehabbing Klay Thompson drains multiple 3-pointers in warmups before a Hornets-Warriors game.

Once Thompson returned on Sunday, Curry showed his appreciation in other ways. Curry scheduled his pre-game warmup around the same time as Thompson. Curry also gave up the last spot in starting lineup introductions to Thompson so that he received the most fan adulation.

“It was special. It set up the love that I know he’s been waiting for with that moment,” Curry said. “He’s gone through so many highs and lows these last 2 1/2 years. That was the moment where you can celebrate that journey, and just go hoop.”

After Curry and Thompson finally hooped together for the first time in 18 months, the two embraced. Thompson then remarked, “This is only the beginning.” That is because he believes the Splash Brothers can end the Warriors’ championship drought.

“He’s been an incredible role model for me, and an even better leader,” Thompson said of Curry. “It felt natural again. Steph is one of the best to ever play it. It’s an honor to be his two-guard.”

Mark Medina is a senior writer/analyst for NBA.com. You can e-mail him here, find his archive here and follow him on Twitter.

The views on this page do not necessarily reflect the views of the NBA, its clubs or Turner Broadcasting.