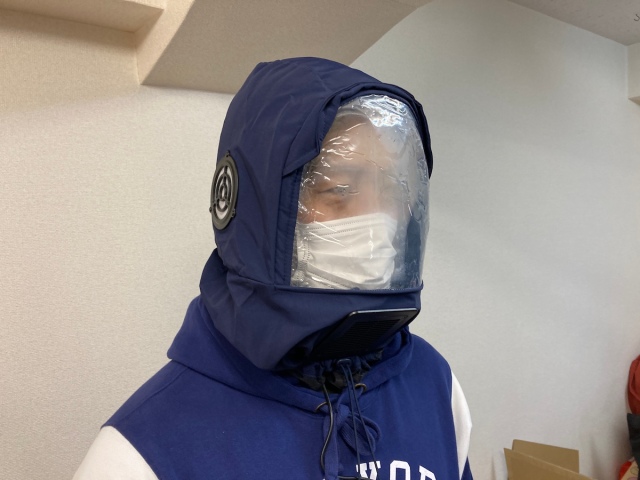 One of the weirdest fukubukuro purchases we made this year.

If you’re in the market for whacky products that somehow weirdly make sense, Thanko is the brand for you. Over the years, they’ve given us delights like the Folding Umbrella Sometimes Poncho, the mist-spraying Fanbrella, and the automatic cup noodle maker, just to name a few, so when we heard the company would be selling fukubukuro lucky bags to ring in the new year, our reporter Masanuki Sunakoma immediately hopped online to make a purchase.

This year, the company offered three different types of lucky bags, priced at 8,000 yen (US$69.09), 16,000 yen, and 25,000 yen, with a limit of one purchase per customer. Masanuki opted for the 16,000 yen lucky bag, which was said to contain “eight items equivalent to 40,130 yen“. He’d have no idea exactly what he’d get until the box arrived though, and that happy day finally came today when the delivery man delivered this package.

▼ Masanuki carefully opened the box with a cardboard cutter, and…

The first thing he pulled out of the pack was…

A pair of “USB Warm Slippers“! These are worth 3,180 yen, and they’ve been so popular this winter they’ve already sold out online. They come with two carbon fibre heating units that slot into both the toe and the heel, to keep your feet warm and toasty during the coldest days of the year.

The slippers would certainly come in handy for all the long hours Masanuki spends at his desk, and this next item promised to keep him warm during the colder months as well. The Heat Band, which usually retails for 4,980 yen, is designed to wrap around your waist or grip onto the inside of suit jackets so you can stay warm without anyone knowing your heat-warming secrets.

Next up we have the “Fan-equipped Refreshing Mouse” (2,380 yen), which is designed to keep your palm sweat-free while you use it. This might actually come in handy, considering all the heating products he’d likely be wearing, if the contents of this bundle so far was anything to go by.

And then, Masanuki pulled out…

The “Super High-Speed One-Person Bento Box Rice Cooker” (6,980 yen). This is one of Thanko’s most popular products to date, and we know firsthand how good they are, having used one in the office to cook a fresh serving of rice in just 14 minutes.

Things were looking great so far, and when Masanuki pulled out the next product, he discovered…

The “Ballpoint Pen Bad Breath Checker” (2,980 yen). Masanuki never would’ve bought this for himself, but now that he owned one he could find it coming in handy for those times when he wants to make sure his breath won’t offend others, like when he’s on a date or attending meetings.

▼ The “odour level” is displayed in five stages.

Now…what could be in this white box?

Behold the “Quick and Easy Electric Steamer (One-Person Desktop Food Steamer)” (4,054 yen). Masanuki had heard that these were particularly great for steaming buns and dumplings, and now that he owned this and a desktop rice cooker, he’d never have to leave his desk to make meals ever again!

It’s the “No-Flame Electric Siphon Coffee Maker (Coffeehouse at Home)” (9,800 yen). With no flame required to use this baby, Masanuki now had another desktop item to keep him at his desk all day long. In fact, he could even start a hustle on the side, charging colleagues for lunch and coffee at this point.

Now, we come to the final item in the pack, which is the…

▼ “Guards your entire face from pollen!”

For a moment, Masanuki thought this might be some sort of air purifier, but when he pulled the product out of its box he realised it was, well…something different altogether.

▼ There was an air purifier in there, but it was inside a full-on head mask.

That’s not all that was inside this mask, because when you connect it to the mobile battery included with the set, it powers up a pair of ventilation fans, kind of like the original Pollen Blocker Mr Sato wore back in 2014.

The fans in this new and improved version are said to be super quiet, circulating clean air inside the mask while allowing you to “hear outside sounds” and enjoy “a clear view of the world” as well. It might take courage for some people to wear this getup out in public, but as we all know, Masanuki is not some people, so he immediately thrust his head inside it and…

…it immediately fogged up, obscuring his view as the sound of the fans made it hard to hear anything outside.

Thanko definitely oversold this one in its product description, but Masanuki didn’t mind it. In fact, the head mask reignited his long-forgotten dreams of becoming an astronaut, and he found his mind taking him to a place far, far away…

As if in a daze, Masanuki followed his instinct to head outside to the nearest moonscape he could find, which wound up being the small children’s park up the street. There, he hopped on his moon buggy and lived out his childhood fantasy of defying gravity, gently riding over moon rubble as he awaited instructions from Mission Control.

In the end, it didn’t take long for Mission Control, in this case our senbero lord Mr Sato, to get in touch with Masanuki — by locating him in the park and dragging him back to the office to finish the story he started.

Now that Masanuki has been guided back to Mission Control by Mr Sato, he’s extra keen to use all the awesome gadgets he received in the Thanko lucky pack for their next senbero drinking party.

We might just stash the Pollen Blocker 3 out of sight somewhere so Masanuki can keep his feet on the ground, though. Because whenever he and Mr Sato get together, their senbero drinking parties can get really crazy!